Compared to manual execution, GP/S 1200 automatic gluing plotter permit to automate and speed up the selective spray adhesive deposition operation made on flat patterns, increase productivity and allow to reduce the number of operators involved in the complete cycle of gluing and assembling
Given the easiness and speed for new operations setup, its usage is indicated and already profitable for small runs of production.
GP/S 1200 gluing plotter is used in different sectors such as cardboard and paper industry, packaging, coating and other.
Entirely designed and manufactured by Angeleri (both for mechanical/electronic parts and CAD-CAM software), GP/S 1200 two axes plotters have a “portal” configuration with fix work table.
The machine is supplied complete of an ergonomic enclosure on top of the plotter bench to cover the complete working area, thus containing nebulization caused by water based adhesive spray deposition.
A suction and filtering system installed on machine board guarantees a proper evacuation of generated nebulization, while a manual sliding pallet allow the operator to easily load the material to be adhesivized and then slide it inside the enclosure on the working bench. 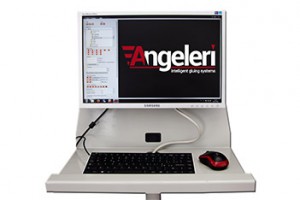 The X and Y axes movement (linear or interpolated) is provided by drives and motors (brushless type) controlled by the proprietary CAD-CAM system, installed on machine board on an adjustable support.
The CAD software allow the operator to easily design on machine board required gluing trajectories, thanks to an intuitive user interface and leaving to the operator the flexibility to choose one of the following mode :
• Using the manual axes movement buttons, the operator move the plotter along the desired deposition path, which is instantly highlighted on the working plan by a laser sensor, and save it.
• By means of an intuitive user graphic interface, the operator can easily draw with a mouse on the PC monitor lines, polilines, circles and arcs that compose the gluing trajectory.

Moreover, it is possible to import gluing trajectories already drawn remotely by a CAD system on the design of parts to be glued, using the standard exchange format DXF.
Gluing paths can easily be modified at any time, directly on machine board.
The operator can add or delete segments or change the execution sequence, as well as define specific waiting times.
The spray adhesive is deposited by means of a nozzle connected to the adhesive tank and the distance between the nozzle and the material to be glued is adjustable.